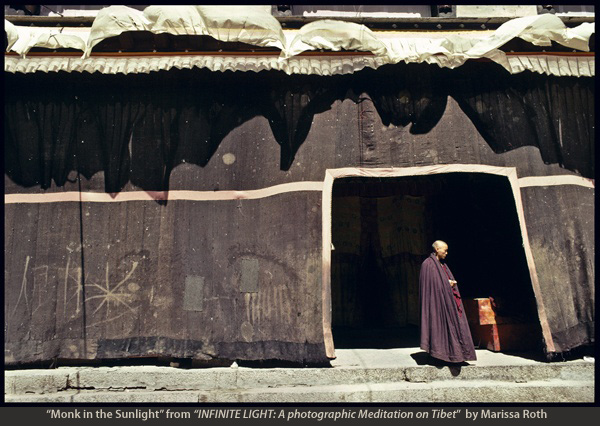 photokunst is collaborating with photographer Marissa Roth on a unique limited-edition book “INFINITE LIGHT: A Photographic Meditation on Tibet.” The accordion style binding presents the photographs organized in a tonal sequence patterned after the colors of Tibetan prayer flags.

Three of Tibet’s most renowned public figures contributed to this project:  H. H. the Dalai Lama, who wrote the foreword, H. E. Jetsun Kushok Rinpoche who provided an endorsement, and Tsering Woeser, whose poem “On the Road” is a moving preface to Roth’s images.

On March 8, 2013, Tsering Woeser, Tibetan writer, poet and activist, was presented the 2013 International Women of Courage Award in absentia by First Lady Michelle Obama and Secretary of State John Kerry, in an official ceremony at the US State Department. The award was presented to Woeser in person by US Embassy staff in Beijing, and among those in attendance were her husband, writer Wang Lixiong, and artist Ai Weiwei.  Secretary Kerry explained the justification of the award to Woeser: “for courageously striving to improve human rights conditions for China’s Tibetan citizens by illuminating their plight through her writings, and thus giving eloquent voice to those whose stories might otherwise never be heard, Tsering Woeser is a woman of courage.” The story is featured on Campaign for Tibet,

This Book Is My Love Letter to Tibet

“It is the reflection of my inner and outer journey and a very personal impressionistic view of what it feels like to be in Tibet. But it is also a social and political statement and another cry for awareness about what is being irrevocably lost.

I chose to photograph with the last of the Kodachrome film, as I knew that the deep, vibrant reds of the monasteries and monks’ robes would sing with this medium, but that the subtle colors of the stones and landscape would be tonally quiet. And, this film gave the truest photographic black. It is this contradiction and duality that I continually search for and respond to visually, as they are seen metaphors for all that exists.”