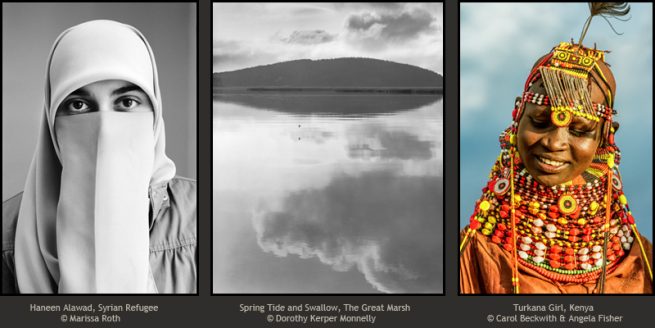 In celebration of International Women’s Day 2019, photokunst is honoring four photographers, all women who have passionately dedicated themselves to long-term projects addressing important far-reaching issues.

Marissa Roth’s “One Person Crying: Women and War”, a 34 year journey of documentation, photographing and interviewing women survivors of thirteen wars and conflicts, reveals ways women have managed to overcome the immediate and lingering challenges of war for themselves and their families. Roth states, “the project brought me face to face with hundreds of women who endured and survived war and it’s ancillary experiences of loss, pain and unimaginable hardship.” Roth created a traveling exhibition of this work, and a book is in development.

Forty years of work on the African continent have carried Carol Beckwith and Angela Fisher across 300,000 miles and through remote corners of 45 countries in exploration of more than 200 African cultural groups. In the process, this team of world-renowned photographers has produced fifteen widely acclaimed books and made four films about traditional Africa. They have been granted unprecedented access to African tribal rites and rituals and continue to be honored worldwide for their powerful photographs documenting the traditional ceremonies of cultures thousands of years old. As an intrepid team of explorers, they are committed to preserving sacred tribal ceremonies and African cultural traditions all too vulnerable to the trends of modernity. Their latest double volume book and traveling exhibition, “African Twilight: Vanishing Rituals and Ceremonies”, completes the journey begun in their epic “African Ceremonies”, covering rituals and ceremonies from some of the most inaccessible corners of the continent.

For more than 30 years, award-winning landscape photographer Dorothy Kerper Monnelly has been documenting one of the last unspoiled wilderness areas in the urban Northeast, a vast tidal wetlands known as the Great Marsh, and advocating for its protection and preservation. With patience and sensitivity, in panorama and closeup, Kerper Monnelly has crafted an exquisite portrait of an underappreciated world. Her large format black and white photographs chronicling years of seasons became two award-winning books,  Between Land and Sea: The Great Marsh (George Braziller Inc., 2006) and waterforms (Verlag Kettler, 2016), and have been widely exhibited, including in the Fragile Waters traveling exhibition.