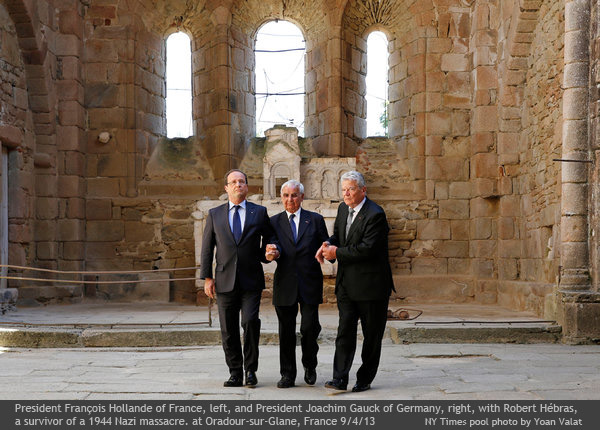 “For the first time since World War II, a German leader joined French officials in commemorating the worst atrocity committed by the Nazis in France. President Joachim Gauck of Germany and his French counterpart, Francois Hollande, joined hands on Wednesday in a quiet ceremony commemorating the massacre of Oradour-sur-Glane, in central France, where Nazi troops killed 642 villagers in 1944.”
New York Times  article by Maia de la Baume 9/4/2013

“When I walked through my “One Person Crying: Women and War” exhibition at the Centre de la mémoire d’Oradour for the first time, everything was quiet. The installation was almost complete, as the opening was the following day, and I had arrived the evening before from Paris. The staff kept their distance and just let me circle the vast gallery, taking it all in.

Every installation is different. The setting, the feeling and the interpretation by that particular institution re-imagines what I have known intimately, namely all of the images and text. Yet, when I see the exhibition in a new setting, its as though I’m seeing it with fresh eyes.

What immediately struck me after seeing the exhibition in Oradour, was that this venue will probably end up being the most significant installation for this project because of its proximity to an actual historical war site. And because it was a horrendous massacre, that also harkens back to my own family history that also sustained a massacre.

In mid-August, the director of the Centre de la mémoire e-mailed me to tell me that there would be an historic meeting between French President Hollande and German President Gauck on September 4th, 2013, and that part of that event would be held in the gallery where “One Person Crying”, is. This meeting represented the first time in almost 70 years that a German leader visited the ruined village and massacre site.

Hearing this amazing news sent a wave of emotion through my soul and knowing that my exhibition was part of the backdrop for this critical reconciliatory event, has been profound beyond words. For me it puts a healing period at the end of a long and painful sentence, that both reflects my own families’ war legacy and my greater hope for countries and cultures to make peace with their complicated pasts and build bridges for a more coexistent future.” 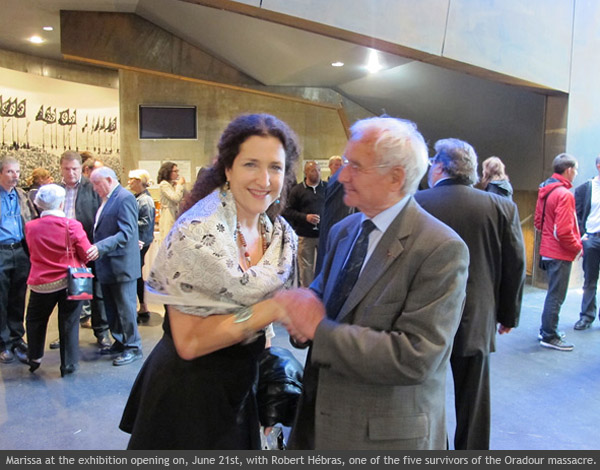