for Sara Duvall on Mother’s Day 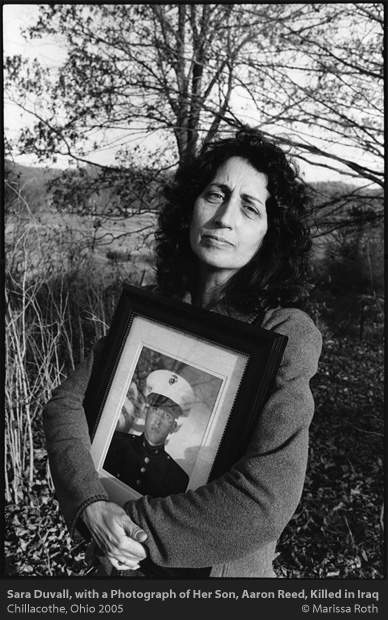 “If I lived in Chillicothe, Ohio, I know that Sara Duvall and I would be friends. When we met for the first and only time on a crisp autumn afternoon in 2005, we immediately started talking as though we’d known each other for years. We are the same age and both love to travel the world.

I was in Ohio on a somber mission, photographing and interviewing many of the mothers and wives of the 24 Marine reservists from Lima Company, based in Columbus, who got killed that summer in Iraq.

Sara agreed to meet with me, and invited me into her beautiful late 19th century rural home, which is nestled amongst gentle trees.  She took me into the dining room and showed me a portrait of her son Aaron, who died on August 3rd. We then sat down at her kitchen table with her parents and sister and talked about their loss, war in general and religious faith.

Afterwards, I asked if I could photograph her outside in the waning sunlight. And I also asked if she would hold the portrait of Aaron. She chose to hug the portrait, and I was able to photograph this intense moment of love and pain emanating from her.”

This photograph is included in Marissa Roth‘s traveling exhibition ONE PERSON CRYING; Women and War which recently closed at the Willy Brandt Haus, Berlin, and will open June 21 at the Centre de la Memoire d’Oradour, Oradour-sur-Glane, France.

ONE PERSON CRYING: Women and War, is a 28-year, personal global photo essay that addresses the immediate and lingering effects of war on women.