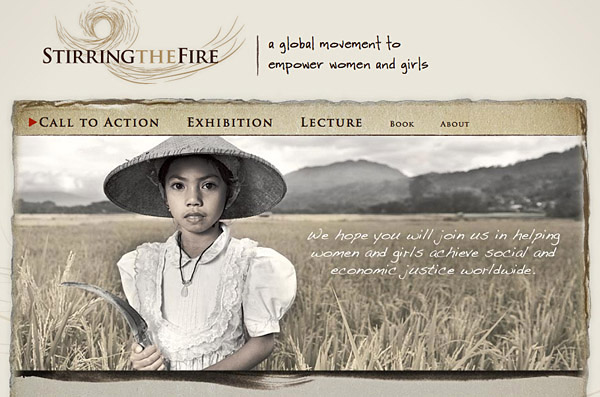 Photokunst marks International Women’s Day highlighting events with three of its photographers:  an exhibition about issues facing women and girls worldwide, a panel discussion of women on their career challenges and successes and a movie world premiere on sex trafficking.

In celebration of International Women’s Day, the Muhammad Ali Center, Louisville, KY, is opening social documentary photographer Phil Borges’ “Stirring the Fire: a  Global Movement to Empower Women and Girls” exhibition., which will run through Mother’s Day, May 11, 2014. Visitors will learn about issues facing woman and girls worldwide, regarding education, economic security, health, leadership, human trafficking, and various forms of violence. Borges’ powerful portrayal of remarkable women and their stories, reveal the pathways that helped them achieve social and economic justice in their communities and beyond.

“The Ali Center’s education programs and exhibits are based on three specific focus areas: education, gender equity, and global citizenship. The Stirring the Fire exhibit brings all three of these areas to life here at the Center.” -Donald Lassere, President and CEO of the Muhammad Ali Center

Marissa Roth will be participating March 8 in the Annenberg Space for Photography’s panel discussion featuring accomplished women who work in photography, journalism, science, relief and development, arts and entertainment. They will discuss the challenges they’ve faced, the successes they’ve achieved and the importance of including a female point of view in these fields, The event is sold out, but will be streamed live Saturday, March 8 at 6:50 pm and will also include panelists: Penelope Spheeris, Margaret Aguirre, and Mireya Mayor.

Also in celebration of IWD, the world premiere of SOLD the movie, will be held at the CineQuest Film Festival in San Jose, CA. March 7th at 7pm, Made by Oscar Award winning team, Emma Thompson and Jeffrey Brown, the film is an adaptation of the National Book Award nominated novel SOLD by Patricia McCormick, and puts the audience in the shoes of an amazing 13 year old girl who is trafficked from Nepal to a brothel in Kolkata. Lisa Kristine’s work as photographer documenting human trafficking inspired a character in the movie.  The film is a global call to action to end human trafficking.. Watch the Trailer