Warning: count(): Parameter must be an array or an object that implements Countable in /home/customer/www/photokunst.com/public_html/photographer_bio.php on line 23
 Biography of Photographer Ernest H. Brooks II | photokunst
photokunst
Navigation
Skip to content 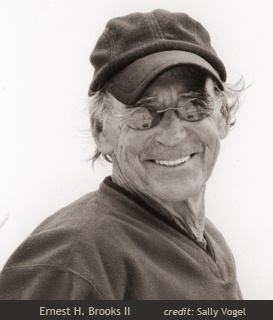 Ambassador of the marine environment, photographer, adventurer, diver and educator, Ernest H. Brooks II was born to be a photographer. â€¨â€¨As the son of Ernest H. Brooks, founder of the internationally renowned Brooks Institute of Photography, Ernie Brooks was destined to follow in his father’s footsteps for part of his life’s journey before forging his own path. Throughout his long tenure as the head of Brooks Institute, he carried out the duties that come with that corporate territory including keynote speaking at international conventions, working with national and international organizations and companies to enhance the industry, and encouraging photographic education and promoting photography as a universal language.

As a noted professional photographer, Brooks has won international acclaim for underwater photography and audio/visual presentation and, in his pursuit of dramatic marine images, has descended into the treacherous waters beneath the polar ice caps and into the depths of every ocean on Earth. As a trailblazer in the development of underwater photographic equipment and technique, Brooks has witnessed great industry advances and though he has harnessed and implemented much of that new technology, at a time when a plethora of color underwater photographs illustrate magazines and glossy brochures, he, perhaps surprisingly, still favors black and white.

His photographic legacy is the evidence that has illustrated the dramatic changes in our oceans, and he himself remains a tremendous voice for oceanic exploration, and through that, the preservation of our marine environment.