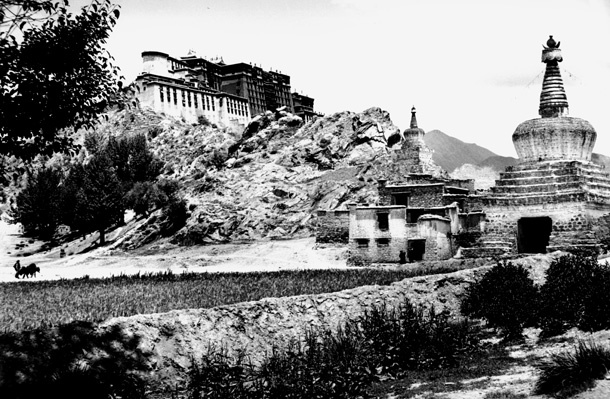 “This immense gate was the only entrance to Lhasa when approached by the caravan route from the west. After nearly two years in flight from India—flight from a world at war—Peter Aufschnaiter and I entered the city through this gate. We had read that monks stood guard at the gate to protect the ‘Forbidden City.’ We were immensely relieved when we walked through it unhindered: we looked like beggars, and much of what had been written was by authors who had never been to Lhasa.

The Potala, winter residence of the Dalai Lama, rises to the left. When we first caught sight of its golden roofs gleaming in the bare landscape, we felt inclined to kneel down and, like the pilgrims who walked with us, touch the ground with our foreheads to thank the gods. We had been on our arduous journey for twenty-one months and had crossed sixty-five mountain passes. We had reached the ‘Holy City’ at last.” -H. Harrer