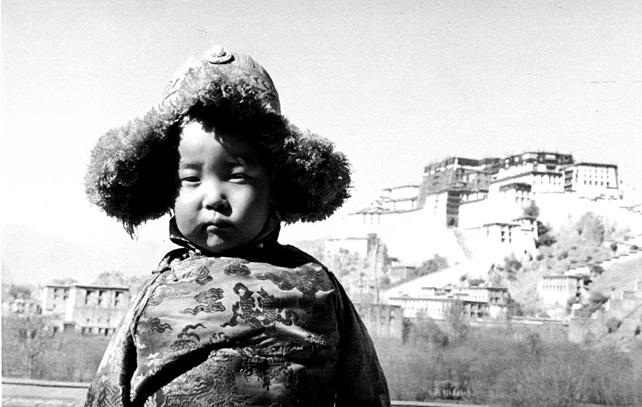 This is Tendzin Choegyal, the youngest brother of the Dalai Lama, at the age of three. Later he was recognized as Ngari Rinpoche, an incarnation of the spiritual leader of several monasteries in Ngari, a large region in western Tibet.

"Three days after he was born, which was shortly after our arrival in Lhasa in January 1946, his mother sent for us to join her guests at the reception to celebrate the birth of her youngest son." -H. Harrer

This photograph was taken on the roof of the family's home, Yabshi Taktser, which means Roaring Tiger House of the Family of the Dalai Lama. Since the Great Mother loved flowers and the tranquility of the garden, Harrer worked there for some time.

Available individually (edition of 25) or as part of Heinrich Harrer Limited Edition Portfolio.