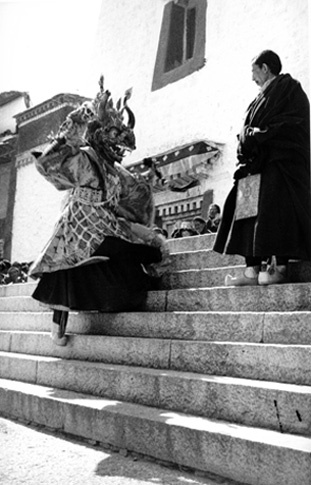 The Tibetan lunar year drew to a close with the Tse Gutor, an important performance of Tantric dances which purged the sins and obstacles of the past year. The ceremonies took place in the Deyang Shar, the great eastern courtyard of the Potala, on the twenty-ninth day of the twelfth month of the Tibetan lunar calendar. The Dalai Lama, hidden behind a curtain, watched from high above.

On this day the monks from the Dalai Lama's official monastery of Namgyal Dratsang, who performed all the rituals and prayers for the Dalai Lama, were in charge of the ceremonies. The dances were accompanied by a large band of monks who played traditional Tibetan instruments. All day long the cymbals clanged above the steady boom of the big drums, while the horns and shawms vied for supremacy with the intermittent clear, high tones of the sacred bells.