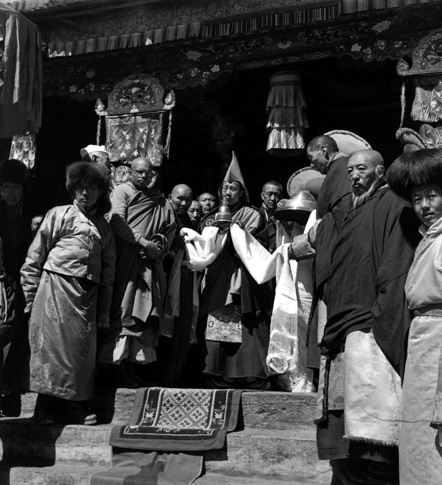 This is the last picture of the Fourteenth Dalai Lama taken in free Tibet. The year was 1951, and the Chinese army had already invaded eastern Tibet and was threatening to advance on Lhasa. His Holiness was at Dungkar Gonpa (Dungkar Monastery), in the Chumbi Valley near the southern Tibetan border with Sikkim and Bhutan, poised for a possible flight to India. Only 16 years old, the Dalai Lama had been invested as head of state two years earlier than was the tradition because of the impending crisis.

Surrounded by many of his entourage and the kalon who fled with him, His Holiness blesses a golden urn containing sacred relics of Gautama Buddha, which the Maha Bodhi Society of Sri Lanka has brought for him to sanctify.

Available individually (edition of 25) or as part of Heinrich Harrer Limited Edition Portfolio.