Continuing their lifework of documenting traditional African culture, Carol and Angela traveled to Cuba in 2014 for a fieldwork study of modern Voodoo, a diaspora of a Yoruban religion originally brought from West Africa during the slave trade.

“We went to Cuba to explore the Yoruba religion of Voodoo which was carried to Cuba by the trans-Atlantic slave trade from Benin and Nigeria, starting in the 16th century. In Cuba today, we find  these ancient Yoruba beliefs and rituals practiced in a religion known as Santeria. Having studied Voodoo in West Africa for over two decades, we were fascinated by the diaspora of an African religion which protected itself by appearing to merge with Christianity, but in actuality practiced its secret rituals in privacy.  It is believed that 60 percent of the Cuban population have their roots in Africa. We were moved to realize that this vital religion which traveled across the Atlantic many generations ago has found a protected home so far from its origins.”  Carol Beckwith & Angela Fisher 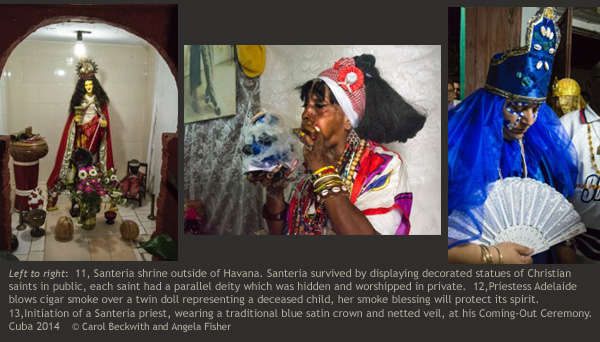