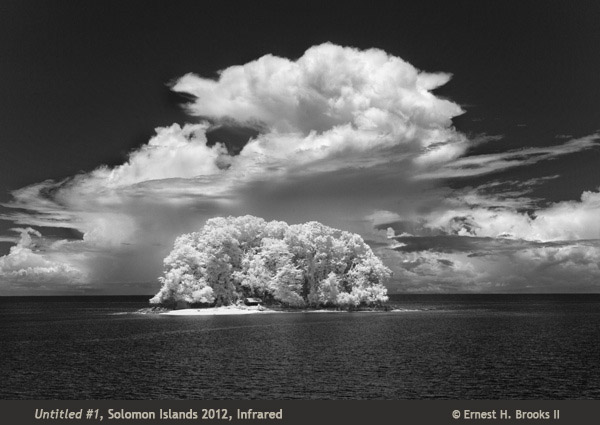 Happy 80th birthday to intrepid diver, renowned underwater photographer, and marine conservation advocate Ernest “Ernie” H. Brooks II. Brooks has been widely honored for his photography, his contributions to photographic technology, for shepherding a new generation of underwater photographers, and as a respected ambassador for the marine environment.

“The homage to Ansel Adams is almost too predictable when describing the photography of Ernest H. Brooks II. That they are both masters of the art and science of black-and-white photography is obvious when reviewing their body of work…” ~Stephen Frink, Alert Diver

Ernest H. Brooks II was born to be a photographer. Ernie followed his father, who was the founder of the internationally renowned Brooks Institute of Photography, before forging his own photographic path. Brooks was a trailblazer in developing underwater photographic equipment and techniques. His book “Silver Seas” featured stunning underwater black-and-white photography captured with a Hasselblad and film, and now his work is digital and infrared.

“Over the years, I have witnessed tremendous change in the field of photography. From the days of the black and white darkroom, where images developed in chemicals to finally appear into a timeless statement, to current day where technological advances have provided tools that take the eye beyond the darkroom and into a greater realm of pure photographic intention and expression. I have grown to love the craft, its art, and the very private and personal time that it takes to pursue perfection.“ ~Ernest H. Brooks II

Over his long and distinguished career, Brooks has accumulated a mantel-full of prestigious national and international awards for his underwater photography and devotion to the seas. In 2013 he was designated one of ten “Legends of the Sea”, joining Jacques Cousteau, Lloyd Bridges, Hans Haas, and David Cameron. His work was recently featured at The International Climate Change Summit in Lima, Peru. He has contributed to numerous organizations and magazines, including the Cousteau Society, Monterey Bay Aquarium, The Nature Conservancy, Ocean Realm, California Highways and National Wildlife. His work has been exhibited in the Metropolitan Museum of Art, Monterey Bay Aquarium Shark Exhibit, Yugoslavia ‘Man in the Sea,’ Our World Underwater, Smithsonian ‘Planet Earth’ and in the current traveling exhibition “Fragile Waters”  (along with Ansel Adams and Dorothy Kerper Monnelly) visiting five U.S. museums, opening at San Diego Maritime Museum on March 1, 2016.

His photographic legacy has illustrated dramatic changes in our oceans, and he himself remains a tremendous voice for oceanic exploration, and through that, the preservation of our marine environments.

“Photography is many things to many people, and for me it has been a vehicle to new lands, a medium for self-expression and a gateway to adventure. It has always been in my life. The ocean and underwater photography are among my main interests and, in the pursuit of dramatic marine images, I have dived beneath the polar icecaps and in almost every ocean on Earth.“ ~Ernest H. Brooks II

Brooks is currently on an expedition to Indonesia photographing black/white infrared images, in order to call attention to deforestation of a small island off North Sulawesi. This summer Brooks will have a belated celebration, joined by many of his former students on board The Nautilus Explorer, outfitted with Brooks’ photographs,, cruising to the Socorro Islands off the coast of Mexico.

“Photography affords us the tools to sculpt with light, to paint with textures and shapes and to write volumes into a single image—creating indelible, lasting impressions of where we have been, who we really are and where our future may take us.” ~Ernest H. Brooks II

“You must illustrate the beauty of light and the presence of design, the form the viewer realizes is a quality joined together to begin a ‘Statement’. These visuals ‘words’ are the language of all the people on our planet, and a language that all photographers need to learn as their careers take form. “ ~Ernest H. Brooks II